Midlifecrisis or delayed puberty in the banana republic

I decided to start my blog again ... and for several reasons I decided to do this restart in english.

Reason number 1 : many of my friends are spread all over the world and don't speak german - and actually these people are very important for me so I wanna share my thoughts also with them.


Reason number 2: in the last time a lot of things were happening in Europe... and I wanna make a sign against all these banana republic developments... I am not interested in a world with borders and the importance of where you were born. 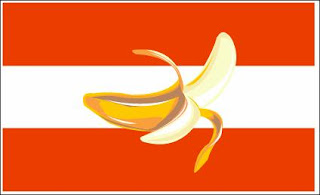 Reason number 3: I noticed that I became a bit lazy when it comes to learning things since I am out of university... which is really a pity... I love learning new things... ok english is actually not really a new thing... but when you don't train a language all the time you lose it... it already happenend to my french after 7 years of studying so I really don't want this to happen to my english... so I thought it could be a god idea to write in english as a little fresh up. Yeah, my english might not be perfect - but nobody is perfect... so if you don't understand something or feel the urge to correct me feel free to write me an e-mail.

I also put a new design on my blog - new phase in life - new design - hahaha if this was only that easy in real life... ;)

Sometimes I have to think about Britney Spears Lyrics "I am not a girl not yet a woman"... ahahahha ... ok it's definitely a delayed puberty....

And the worst thing is that I have the feeling that others are not feeling the same way... I have this feeling that I have to conquer the world... or at least travel the world... become a superhero... do the most of it all... and while I am writing these words I got the feeling that nobody will understand what I mean... all the others seem to feel so comfortable with all that "adult" stuff...
Ok they don't really seem super happy and have the fulfilled life I am dreaming of... but still they seem quite ok with their jobs, their engagement rings, their babies, their average boyfriends (no I don't mean yours - your boyfriend is awesome - he's great... hem... yes... ;) ).
No I am also not jealous... it's just a bit crazy that I sometimes have the feeling that a single lady about 30 that isn't ugly as poison or stupid as bread is sometimes seen as an alien...
Once a friend told me one thing... he said "Never be just content - try to be happy - you deserve it and you will get it". Actually he told me that when we decided it's better not to be a lovecouple but just friends or just strangers - so maybe I shouldn't take that sentence too serious, but actually that's what I feel...
But you never can look into people's minds... probably they feel the same way...probably they are really happy... what's good for them doesn't has to be good for me... and actually I don't know yet what's good for me...

Ok this becomes a real soul-striptease...but that's what the internet is for, right? ;)

But I wanted to tell you about something different... I wanted to tell you about my "spoil yourself day"
Thanks god I don't have those "Oh I need a ferrari" symptoms in my midlife crisis... probably the only reason for that is the lack of money... because actually I played with the idea of getting a motorbike-license and buying a motorbike... but then the adult me said NO - this should be your midlife crisis... so you still have to life some time!!!

But after some soul-destroying weeks I really felt the urge to do something for myself.
And as my shoulders and back are hurting like hell... so I decided to book a massage in a dayspa... but as don't do things like that often I first had to look for a dayspa in vienna.
Thanks google - I found this little place in the first district - the Aisawan Spa. On the homepage it looked like an Thai temple. So I decided not to listen to reason (you should save your money, it's so expensive, do you really need this) - and called them. Nobody replied... ok so no massage for little Julie. But just a few minutes later my phone rang. "Hello, here is Aisawan Spa - I am really sorry that I missed your call - what can I do for you" - the man on the phone whispered in a way that made me not sure anymore if that was that kind of massage I was looking for....  "Ehm ehm ehm... I just wanted to ask if I could make an appointment for a thai massage on saturday?"
"You're lucky I have one spot left at 5pm - is that ok for you?" - he whispered again with this erotic-hotline voice. "That's perfect - see you tomorow".
My colleagues at work already made fun of me and were joking around what kind of massage I had probably booked.
So saturday around 4.45 I arrived at this little place and it really looked like a Thai Temple.
A young lady welcomed me and let me change my shoes into comfy slippers. Then she offered me some green tea. It was all decorated with so much love.
Then she came with a range of different aromatic oils - she let me smell them all and asked me to choose one.  I chose jasmin and had the feeling that I was nearly bursting into tears - not because I was sad.. but because it's been long that someone was that nice to me... ok actually I pay them 90euros for being nice for one hour (ok you could get that wrong) but still...
They gave me a white bathrobe and showed me where I could change. Then the masseur came and washed my feet and brought me to the spa area. She showed me the bathroom. There was a golden thai god statue next to the toilet. I was never peeing in such a beautiful and relaxed atmosphere before :). Probably I should also put a golden thai god statue near my toilet at home. I washed my hands and used one of these cute tiny towels. Then the masseur lady brought me to the massage room. I never had a thai massage before and was a bit suprised when she was crawling on my back. But it was a really relaxing massage (no it was not an erotic massage ;) ).
After the massage she brought me to another room with another golden thai god statue. She served me some green tea and a banana-muffin that was still warm. I felt like in heaven and was again nearly bursting into tears (ok I should really work on that!). 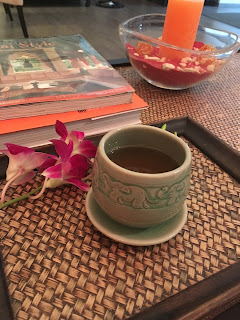 To make the "Spoil Jubo day" perfect I decided to have a pedicure at Nails 2 go  which is probably not that fancy as the Aisawanspa but they are offering a really good service and it's only one of the few walk in studios in vienna. It felt so good to do something just for myself - just taking care of myself - I think we often wait for others to do that - but it's your own responsibility to take care of yourself.

So take care of yourself :)

Have a beautiful evening!